The Evansville Otters are a professional minor league baseball team based in Evansville. The team is part of the West Division of the Frontier League. The Otters have won one league title and five division titles since their inception in 1995. The team plays at Bosse Field, which has been used for minor league baseball since it opened in 1915 and is the third oldest ballpark used for professional baseball on a regular basis in the United States. The Otters were previously known as the Lancaster Scouts (1993–1994).

The Evansville IceMen are a professional minor league hockey team based in Evansville. The team is part of the All American Hockey League. The IceMen's home stadium is Swonder Ice Arena. On February 14, 2009 Evansville IceMen goaltender Kira Hurley became the first female goalie to ever register a point in a men's professional game. Because of this achievement, Kira is in the Hockey Hall of Fame in Toronto, Ontario, Canada. Kira's game memorabilia (goalie stick and game jersey) is on permanent display in the minor league section of the Hall of Fame.
Zum Vergrößern anklicken.... 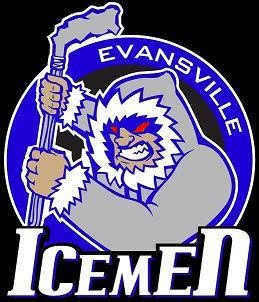