translation of the german Interview by Daniel Mayer

Readers of this blog have noticed: Polaris is being reissued with a currently running Crowdfunding.

But be careful: I’m talking about the underwater roleplaying game Polaris, not to be confused with the collaborative indie rpg Polaris: Chivalric Tragady at Utmost North (2005) by Ben Lehman, published by These Are Our Games.

Author Philippe Tessier talked with me about Polaris:

Hello, Philippe. Please introduce yourself.
My history is rather uncommon. At first, I was running a game and miniature store for several years, a company that my administrative „skill“ was not up to. I met people like Henri Balczesak (Jeux Descartes) and Guillaume Gille-Naves (Halloween Concept). Henri let me work as translator (for Earthdawn) before handing me the project Shadowrun France. Guillaume lead me through my first steps as translator and realisation with the Guide Tooniversel (for Toon) before publishing the first edition of Polaris. I worked as a translator in several areas, from video games to articles about poker. I have written several novels, some in the world of Polaris, others in other settings like Sélénie des Terres mortes, Les Anges Foudroyés or Loups d’Uriam.

Are you playing yourself? What roleplaying games and backgrounds do you love?
Yes, for thirty years now. I have played many games and liked most of them. If I had to choose, I would pick Rêve de dragon, Gamma World, Jorune, Runequest, Traveller (classic and 2300 AD), Numenera and AD&D (I stayed with the first edition!).
How did you get into the team?
I was contacted by the guys of Black Book Editions in 2006. They wanted to take over Polaris and create a new edition, as the former publisher had closed. I took the chance and we made a new edition. A successful crowdfunding a few years ago lent to a true revival.

Please introduce the team.
The other writers are Raphaël Bombayl and François Menneteau who created the new edition with me. Raphael had the difficult task to create a new rules set, Francois oversaw all technical aspects of the setting and allowed me to create a robust and logical background. 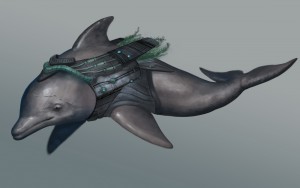 
Polaris will have a new edition. Can you tell me how Polaris came to be?
Polaris was created in 1996 thanks to Guillaume Gilles-Naves and his publishing house Halloween Concept. He wanted to publish a roleplaying game with a new or little used topic. The game was successful und the 2nd edition came out in 1998, also being really popular. Unfortunately, the sitation got complicated, and the publisher had to close down. Until Black Book Editions took over the game in 2006, it was kept alive by the Polaris forum (http://www.polaris-site.com/forum/) and the SDEN (http://www.sden.org/).

What will be the difference between the editions?
The greatest difference will be rules and some technical aspects. Underwater technologies have come a long way in the last years, and we took the chance to fill technological gaps with Francois Menneteau, like the concept of some vehicles, weapons, engines and so on. I also changed the background to keep them coherent even though encompassing many nations and groups. And of course this edition is completely in color!

Polaris has a very dense world you can have many types of adventures in (intrigue, pirates, spys, survival, scientific exploration like SeaQuest DSV and so on…) What is Polaris‘ core story?
I would say it is mostly the fight for survival, against difficulties like missing material, pirates, deep-sea monsters, intrigues of the great nations or against unknown dangers awaiting the adventurers in the depth of the ocean, on the surface, deep under the earth or in the strange dimension of flux. Exploration is also an important theme of the game.. 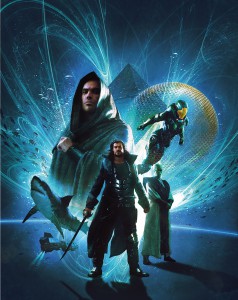 
What fascinates you most about the setting?
Mostly the ocean. Sea, depth, darkness, waster pressure. These are incredible elements that can be extremely interesting for sci-fi and fantasy alike. It’s enough to have spent one night on the water, surrounded by the ocean, to understand the secrets of the sea, which are as disturbing as fascinating. This is a great source to play with, to invent, to explore. There is also underwater technology that gets more and more interesting, like torpedoes or supercavitation vehicles which are science fiction no longer.

Polaris is not restriced to the ocean floor. Humanity is also headed for space since the moon is „online“ again. Can you tell something about that, or is it a topic for later books?
So far, space is only mentioned in passing in Polaris and is confined to one important element: The Orbital Alliance. Of course we plan to develop this further, just as the surface or the subterranean layers of the earth. The people on the stations in space live like on the moon, Mars or another planet. They have a different view on things and it would be interesting to develop their way of life. And of course we will learn more about the giant satelite circling Jupiter: Corps X.

Are there plans for more books?
The French version has several novels and sourcebooks, like
Coral Republic, Polar Alliance, Amazonia, Mediterrannean Union, a Tech Guide and an adventure compendium. Depending on sales there will be new sourcebooks, revised editions of Hegemony, Red League, Pirates and the surface. More books are planned… 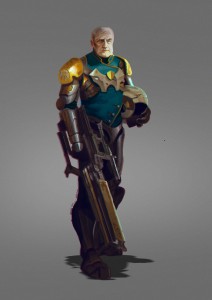 
What would your Polaris character look like?
Like a Genetician ! I prefer to play subtle and smart characters. I also have a liking for the cyborgs of the Polar Alliance and their tragic side.

What type of adventures do you like to play in Polaris?
I prefer atmospheric adventures in a fantasy atmosphere. Exploration with forsaken submarines, undiscovered underwater ruins, lost stations and so on. I think the surface has opportunities for great exploration adventures. 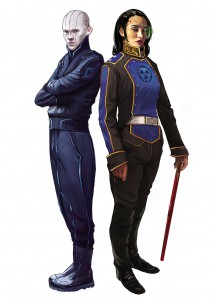 
What are the inspirations for Polaris?
There are many. Of course there are all novels and movies about submarines and underwater locations: Das Boot, Abyss, The Hunt for Red October, Crimson Tide, Voyage to the bottom of the sea, 20,000 Leagues under the Sea and the novels by Michael Dimercurio. But there are many sci-fi inspirations like Alien, Mad Max, Cosmos 1999, Battlestar Galactica, Dune, Grand Star and even Perry Rhodan. Everything I read and see can be an inspiration.
Other aspects of the game are insprired by fantasy works like those of Jean Ray or Lovecraft and works that combine science-fiction and fantasy, likel Event Horizon. A big inspiration was The Night Land by William Hope Hodgson aufzählen, but there were also other sources like the horror movies by Lucio Fulcio or Westerns.

You plan to publish the core rules as two book…
It’s wasier to handle and we think that two slender books look better than one huge tome. We can separate character creation and rules from technologie and material in the second book. We also have to covers instead of one
… which means two illustrations by Simon Labrousse

What do the books contain?
The first book has all background information for the game, the core rules for character creations and the game system. The second book contains equipment, the chapter about exo armor, companions, underwater combat, advanced rules and a base of creatuers.

Alpha & Vira Our by Grégoire Veauléger


There are also novels about the world. Will they be re-issued?
This depends on the success of the new edition, but yes, Black Book Editions plans to translate the novels, even though this might take a while.
It is often said that French roleplaying games have fascinating background worlds, but lack in rule design. What do you think about French rules?
Yes, we tend to focus on the background, but I don’t think that we neglect the rules. The greatest challenge is to create rules that support the background. But this is not only a problem for the French. Whether French or not, many writers prefer the setting, and it’s their decision.
One stretch goal are Savage Worlds rules for Polaris. Will there be other alternative rules? If yes, which ones?
There are no current plans, but you never know!
Philippe, thank you for your time. I hope you have great success with your great setting!

Torg Eternity – Into the Storm

Sachbuch Apocalypse Never: Why Environmental Alarmism Hurts Us All
2